How Ogden Valley Adaptive Sports Came To Be

Ogden Valley Adaptive Sports (OVAS) officially began in 2009. But it took multiple years, one daunting transition, and a handful of passionate people.

When Stew Marsh joined Snowbasin in 2004 to oversee and expand the ski school, he knew he wanted to add an adaptive program. A decades-long ski industry man and former ski instructor, Stew, like many, was awed and inspired by the event that had happened in Utah two years earlier. For the first time ever on the American continent, the Winter Paralympic Games took place in the U.S. and Snowbasin was the site for several of the alpine events. For many locals and mountain employees, it marked their first-time seeing skiers on adaptive equipment and it made a lasting impression. But amidst the mountain’s rapid post-Olympic growth, Stew found himself strapped for time. It would be another five years until an adaptive program officially took root. And it would take the arrival of an unlikely couple from an unlikely place.

Nearly every year since the early ‘80s, Jim and Karen Bradley had been driving from their hometown in northern Michigan to Utah for ski vacations. When they retired, Jim as a cable technician, Karen as an elementary school teacher, they decided to spend an entire winter in Utah and finally live out Jim’s childhood dream—being a ski bum. Wanting to also be a part of a community, they applied for part-time work at several mountains. Snowbasin called them back first. But the hiring manager didn’t want them as mountain greeters, the position to which they had applied; he wanted them as ski instructors.

Even in Michigan, Jim had spent most winters of his life on skis. At 12, he started teaching his friends. When he met Karen in 1971, he taught her, too. Together, along with several other northern Michigan community members, they became locally known as “the people who teach skiing for free.” When a mother asked if they’d be willing to teach her 6-year-old son with one leg, sometime in the ‘80s, they didn’t initially know how but they didn’t hesitate to try. The young boy soon was skiing alongside his brother, whom they had taught too. Jim was so lured by the new challenge that he got certified in adaptive skiing by the Professional Ski Instructors of America in one of their earliest classes the next winter (national standards in adaptive skiing wouldn’t be adopted until 2009). Throughout the ‘90s, Jim traveled regionally to help at events for the then fledgling sport. With Karen’s help, he raised money to buy adaptive ski equipment for their hometown ski hill—equipment that would, years later, help jump-start another program in another state.

In the winter of 2007, when Jim and Karen arrived to work at Snowbasin, they were surprised that an adaptive program didn’t already exist. With one question, they ignited the program that would bring them back for what they could have never imagined to be 15 consecutive seasons. Jim asked Stew, “Can we start one?” Karen, as one ski instructor put it, would become the program’s “backbone.”

Getting buy-in from the other instructors was easy, and two of them already had adaptive teaching certifications. Stew helped persuade Snowbasin executives. But budget constraints made procuring equipment more difficult. This was a significant hurdle, as it is an essential component to all adaptive programs. In the late fall of 2008, as they filed and waited for nonprofit status, Jim and Karen packed their car with not only their own gear for another winter but also two bi-skis and four outriggers, on loan from their program in Michigan. By the end of that winter in April 2009, OVAS (then called Snowbasin Adaptive Sports Education Foundation) had received its first piece of equipment, held its first board of directors meeting and cemented itself as a nonprofit.

Jim credits Stew’s support for keeping the program moving forward in its early years. But several years later, the program confronted a major and, to Jim, scary crossroad that would turn into a critical tipping point. Snowbasin, which oversaw and financially supported the program, had been encouraging a new arrangement. The resort suggested the program separate from Snowbasin and become an independent entity. It was an exciting idea from the perspective that an independent organization could better serve the Ogden Valley community and support the other nearby ski areas, Nordic Valley and Powder Mountain. But it was also scary, Jim said, because neither he nor Karen had ever navigated such a transition. He wasn’t sure how they would come up with the money to pay their instructors. Then Jim gave a lesson to an inquisitive client with paraplegia one day, with the conversation spilling over multiple rides in the chair lift. That client was an unlikely man from an even unlikelier place.

John Henderson lived in Hawaii and had been coming to Ogden Valley to ski since the early 2000s. When a tour bus hit and nearly killed him in 2009, leaving him paralyzed, skiing was just one of dozens of things he figured he’d never be able to do again. But that changed when he discovered the adaptive program, talked to Karen and booked some lessons.

For John, returning to the slopes despite all his injuries marked a pivotal and uplifting step in his journey toward reclaiming the life he had lost. As Jim expressed uncertainty about the future of the program, John snapped into action. Drawing upon years of business and leadership experience, he became the president of the board of directors, infused a can-do attitude, recruited volunteers and did “the lion’s share of the work” himself, according Don Hickman, current board president. By the end of 2015 and John’s tenure, the organization was entirely restructured and re-named. Just as importantly, a new marketing and branding plan was implemented and instructors were outfitted with unmistakable tangerine-orange jackets. Those jackets have come to be recognized as a symbol of inclusion across all three Ogden Valley mountains. “That’s when we took on our own identity,” said Dustin Anderson, longtime ski instructor and founding OVAS staff member.

Dave Del Carlo, the subsequent board president, carried the momentum, streamlining and organizing what had been put into place while paving the way for growth. When Don Hickman, a retired Air Force Colonel and existing board member, became board president in 2019, he was clear about his goal: provide year-round adaptive recreation. He spearheaded the process to hire their first executive director and their first full-time program director in 2020.  OVAS finally expanded to summer-time activities the following year and launched its first season of cycling lessons. “There is enormous need and enormous growth potential,” Don said. “I’m a glass half-full kind of guy. If we build it, they will come.”

OVAS exists because of dozens of volunteers and donors who’ve worked year after year to create opportunities for accessible outdoor recreation. As the organization reflects on its past and honors the tremendous 15-year-long contribution made by Jim and Karen Bradley, it simultaneously prepares for its future, poised for growth and ready to ADAPT. 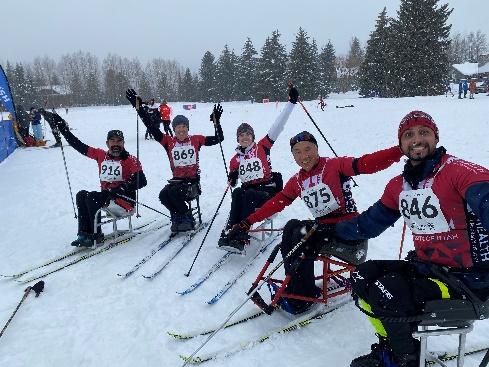 ADAPTIVE CROSS-COUNTRY SKIING AND THE “WOW” OF THE GREAT OUTDOORS

Do you want a different skiing experience from the

Josh Hansen, a retired U.S. Army sergeant, has been 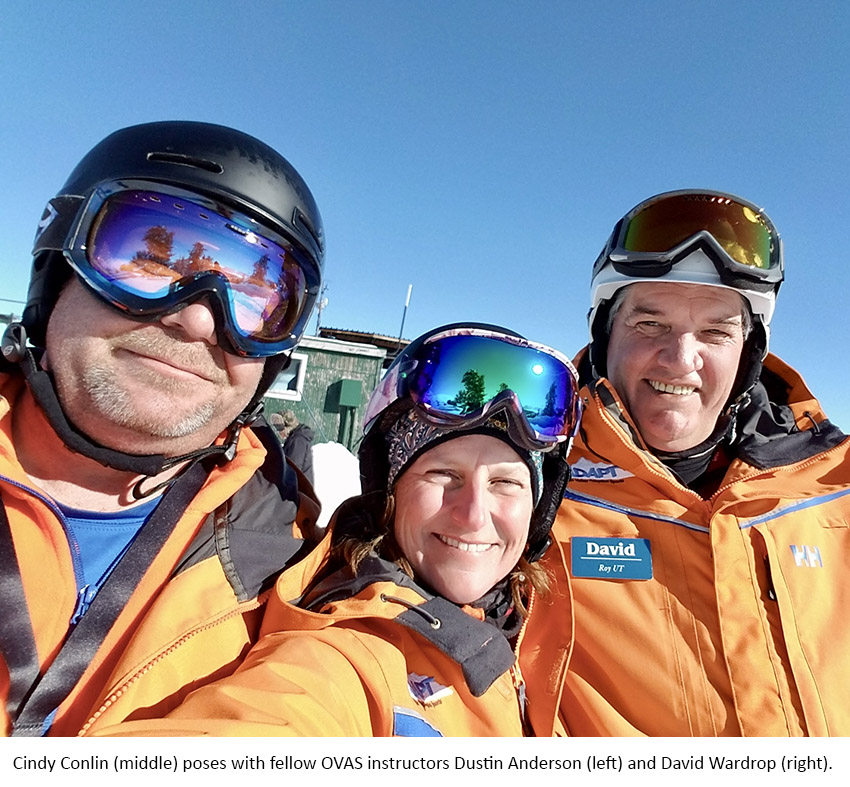 Talk to people who know Cindy Conlin, the five-foot-two 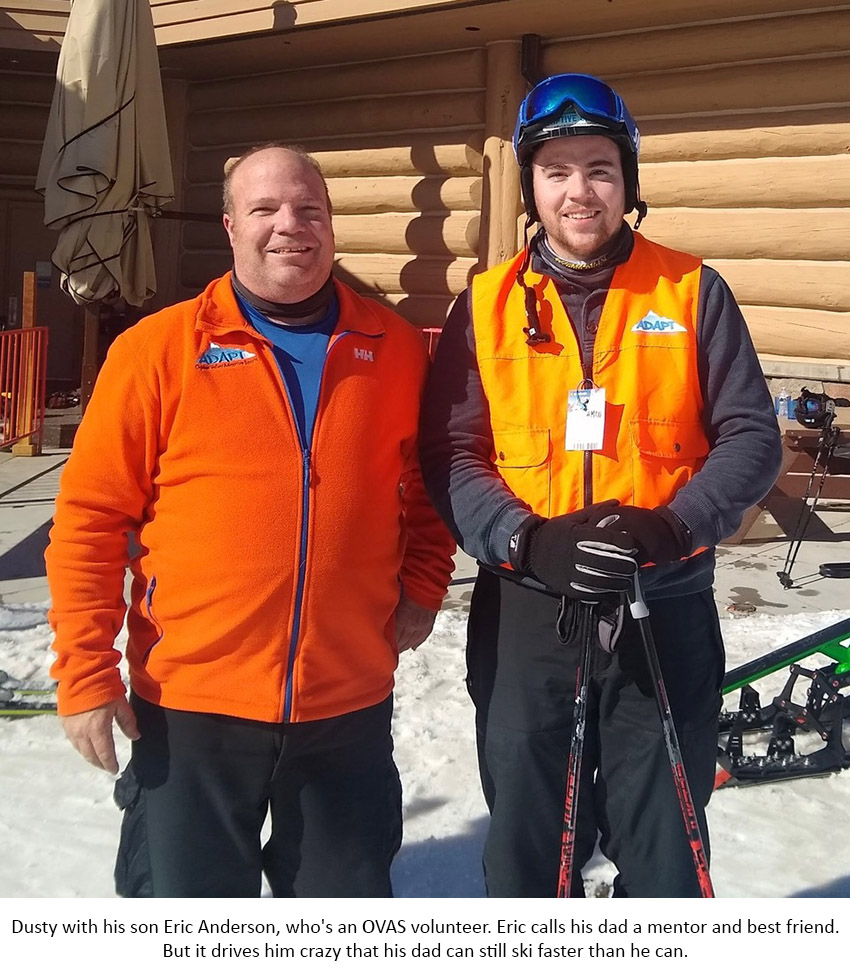 It isn’t immediately obvious what makes Dustin Anderson so